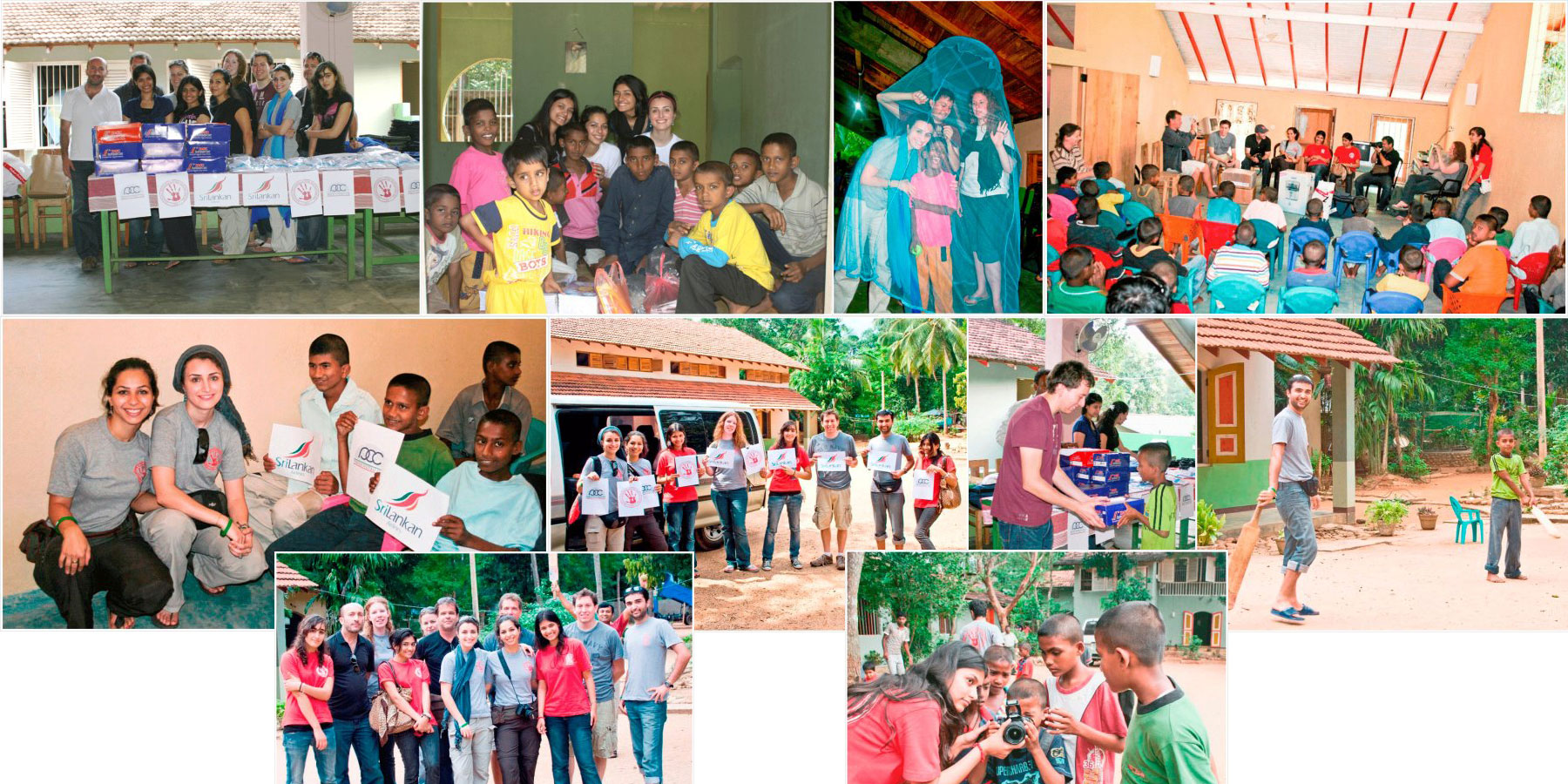 The American University in Dubai International Aid Society (AIA) volunteers and the different humanitarian activities they conduct throughout the year have proved that with determination and a big heart, one can make a difference in the lives of those less fortunate.

Twelve AIA volunteers recently travelled, at their own expense, to Wellawaya in Sri Lanka to work with the Art of Living H.H. Sri Sri Ravi Shankar Children’s Living and Learning Centre, where they spent time playing with the children and making donations purchased with the funds raised on campus during the Fall Semester 2009 dirham war event.

After meeting with the administration of the centre to determine the children’s needs, the volunteers purchased a series of supplies that were recommended for the children, including: a water purification machine, school uniforms and shoes for 35 students, school bags, mosquito nets, athletics equipment including cricket bats, footballs and tennis balls, a radio, board games, slippers, school supplies including notebooks, pens and pencils. Several AIA volunteers also donated clothes and personal items.

"The biggest donation we made was the water purification machine, which the centre really needed. Hopefully, this will have a lasting improvement on the health of the children", comments Sareh Ameri-Mills, President of AIA.

"Buying them school uniforms will help them fit in at school, so they are not recognizable as the children from the Centre. They will look just like all the other children", says Professor James Henry; as for Ghazaleh Nekui Ellis, Project Manager, she adds that "the children's genuine smiles and joyous reaction to the donated items presented by AIA were well worth the effort spent preparing for this project". In her turn, AIA Vice President Warkha Lalchand commented that "our presence in the orphanage and the goods donated will have a life-long impact on the children. In addition, the inner satisfaction from this project has given us a strong motivation to continue our efforts and plan for bigger projects in the future."

On this being a one in a lifetime experience, Professor Sarah Lahti comments: "Spending time getting to know the boys, playing cricket with them, hanging out with them, and basically building trust and goodwill, I came away from the Living and Learning Center wanting to further the working partnership with them. I hope to someday go back and visit them".

IT Services Manager Frank Seifaee decided to travel with the AUD International Aid Society to Sri Lanka to play a part in their mission to help the children in the orphanage in Wellawaya. He says: "The visit to the orphanage was the absolute highlight of my journey. Interacting with the children and seeing the unconditional joy on their faces was immensely rewarding. I felt so privileged to be a part of a dedicated team that worked tirelessly to make a difference".

AUD’s International Aid Society is gaining quite a reputation for their humanitarian work in these large projects, and also from the work the group does fundraising for local projects and in response to humanitarian disasters, like the recent typhoons in the Philippines and the earthquake in Haiti. Officers routinely get emails from people in the UAE asking for advice, to join other charity work, to make donations and to request speakers about AIA’s work.

Professor Kenneth Curtis commended the work of the AIA members "I really can’t say enough good things about AIA and the leadership that organized the trip to Sri Lanka".

His main reason for volunteering to go to Sri Lanka was to help others:

"It seems as there are many times when we simply don’t have the opportunity, or even possibly the resources to help people in need. When I heard that the AUD International Aid group was going to Sri Lanka it was the perfect opportunity, both in timing and structure. Sareh Ameri, along with the other officers from the group had all the logistics worked out, which allowed the rest of us to focus on helping the children in the orphanage. The end result was an experience that I will remember for some time".

The AIA volunteers have the Sri Lankan Airlines to thank for providing them with reduced tickets prices to Colombo, as their generosity made it possible for many of the volunteers to go on this trip. The AUD Persian Cultural Club played a big role as well as much of the funds spent on the donations for the children were provided by them during the Dirham Wars event.