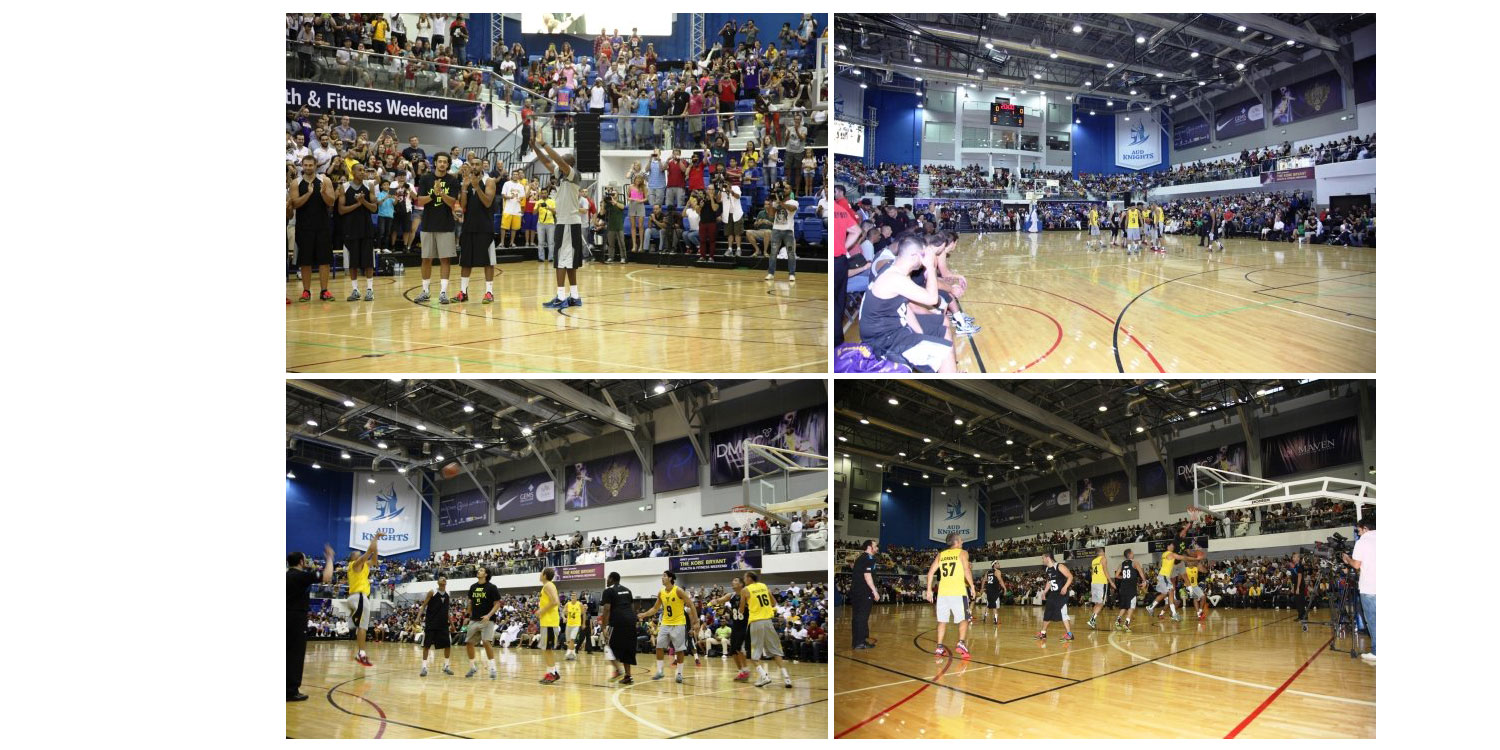 Attracting basketball enthusiasts from across the Middle East

The American University in Dubai (AUD) hosted basketball superstar Kobe Bryant during a celebrity game as part of The Kobe Bryant Health & Fitness Weekend at the AUD Knights Arena. The event, organized in aid of diabetes awareness, climaxed with a celebrity basketball game and attracted prominent attendees including Ambassador of the United States to the UAE, H.E. Michael Corbin, as well as the Ambassador of Spain to the UAE, H.E. Jose Eugenio Salarich. Ambassador Corbin, who stepped on to the floor of the arena to do the tip-off for the first half, said: “The Kobe Bryant Health & Fitness weekend provides a great opportunity to raise awareness of diabetes and other health issues. The buzz surrounding today's events underlines the close ties between the US and UAE across a wide range of common interests, from commerce to culture to sports.”

The game got off to a resounding start with Kobe Bryant intently focused on his coaching responsibilities for the home team. Celebrity game player Kris Fade took a mike and added some impromptu voiceover to his fellow Virgin Radio broadcaster Priti Malik, who was emcee for the game that afternoon.

On the celebrity team the players from the UAE were front and center. Mohammed Abdrabboh, general counsel, DMCC, presenting partners for the weekend; Mohamed Al Mubarak, deputy CEO, Aldar and chairman Imagenation; Amer al-Sati, AUD student and basketball player; and Rashed Alzaabi, and Qais Alshabebi, regional professional basketball players made the crowd go wild with their fancy footwork and breathtaking baskets. The Real Madrid basketball legends put up a formidable defense but had to concede defeat as the final scoreboard read 72 to 63 in a closely contested match.

Basketball was not the only activity that had the audience glued to their seats through the afternoon. DJ Trauma had been ensuring the crowds were grooving to the beat through the game then at half-time Soulja Boy took the microphone to sing his hit single “Crank That”, which had a seven-week run on the US Billboard Hot 100. Real Madrid basketball legend Joe Arlauckas, who played both halves of the game, joined Soulja Boy to do the moves and most of the audience was also on their feet cranking it up.

Kobe’s appeal for children of all ages was apparent when he chose 10 children to play a popular half-time game where they had to don over-sized clothes then shoot a basket. The winning duo included Jadon Folmar but the audience’s heart was stolen by the youngest child in the game, who Kobe singled out for some special attention.

Soulja Boy went on to judge the slam-dunk competition immediately following the game alongside Kobe Bryant and DMCC executive chairman Ahmed Bin Sulayem. Bin Sulayem is a Kobe Bryant and basketball fan and his voiceover while commentating the celebrity game was an evidence of both. The trio of judges awarded AUD student Amer Al-Sati the award of best dunker in the UAE.

The Dubai Multi Commodities Centre (DMCC) is the presenting partner for the Kobe Bryant Health & Fitness Weekend. DMCC has a mandate from the government of Dubai to provide the physical, market and financial infrastructure to set up a commodities market place in Dubai. It is the licensing authority for JLT, one of the largest mixed-use, free-zone developments in Dubai. DMCC recently announced plans to build the world’s tallest commercial tower as part of an expansion plan to attract more multinationals.