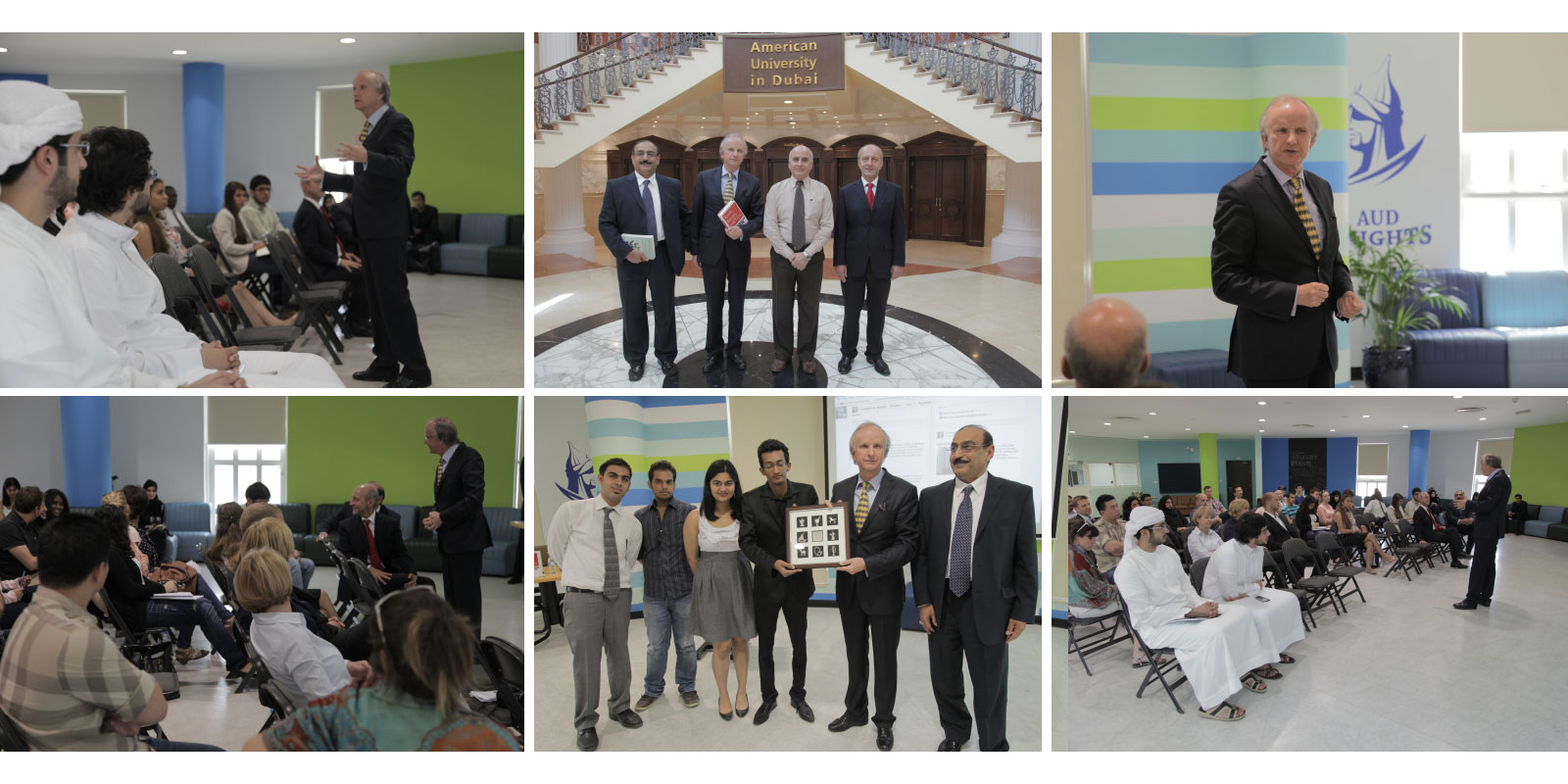 The Economics Student Club and the School of Business Administration at AUD recently hosted renowned Polish politician, policymaker and trendsetter Professor Grzegorz W. Kolodko who gave a lecture under the theme: "Whither the World? Globalization at the Crossroad" in presence of Mr. Janusz Byliński, 1st Counselor Head of Political and Economic Section Embassy of the Republic of Poland. The session was attended by a large number of AUD Students and Faculty members who were intrigued by Professor Kolodko’s debate.

Organizing such lectures is in line with one of AUD’s B.B.A. program missions, to prepare students with the knowledge, skills and abilities needed to become effective and responsible managers and leaders in today’s global economy. Professor Kolodko has been consistent with his firm contention that economists are supposed to describe and explain what’s happening.

“This is exactly what we need to convey to the young generations around the world since they would be the future leaders. We must provide our youth with the truth about the economic policies that have led to the current financial crisis,” explains Dr. Abu Ali.

After the discussion, we asked Professor Kolodko’s opinion about being at AUD and he replied: “I was doing my best not for the first time in Dubai, but for the first time at AUD. I was keen to learn the reaction for my arguments, my train thoughts and comments because my research is very much policy-oriented in one hand and comparative in the mixed politics on the other hand.”

Professor Kolodko continued that he had come to the UAE, to Dubai, and to AUD to continue his struggle for a better world to answer the questions of the professors and media and above of all the students. “The students who attended were from several countries including Afghanistan, Malaysia, Mexico, and Western Europe, from Arab countries and of course from the UAE. I am finding this discussion as lively and inspiring because I am coming not just to teach and to share my knowledge, but I am also coming to learn.”

“When I am listening to the way the questions are being asked I am learning and I am taking back from this University not only good memories, but also some issues, some questions, some concerns to be dealt with, hard to move forward and hard to make the future based on knowledge, more promising, more sustainable, more equitable.”

AUD Students and Faculty members were actively participating in Professor Kolodko’s discussion, while raising the current economic issues of their countries and learning from Professor Kolodko’s wise answers.  One of the Faculty members who participated in the debate was Dr. Meedo Taha, Assistant Professor of Digital Production and Storytelling at MBRSC, who asked Professor Kolodko about three potential problems the economist could face in the dissemination of information mentioned in an early section of his book Truth, Errors, and Lies: “Know, but cannot convince; don't know but try to convince anyway; know one thing and convince of the other” while speaking of economic globalization, the globalization of ideas is an ongoing parallel phenomenon. Dr. Taha’s question was: “Taking the growth of Facebook with its 800 million users and an IPO valued in tens of billions of dollars as a case in point, can one trace a correlation between economic globalization and the globalization of ideas?"

Prof. Kolodko’s replied to Dr. Taha saying that it is absolutely not only a correlation, but one could go as far as to say that the two are inextricable. Unlike most economists, Professor Kolodko does not despise culture but rather encourages the study of cultural change, evolution and dissemination in any analysis of contemporary economics.

“I am glad that I had the chance to spend this day here at AUD, and I had the opportunity in the aftermath of the lecture to discuss the issue of possible likely future collaboration working together maybe joint research projects between my institute TIGER which stands for Transformation, Integration, Globalization Economic Research Kozminski University Warsaw, Poland where I am from, and the research part of the AUD,” concluded the Professor.

The title of the lecture has been "Whither the World? Globalization at the Crossroad" as it is related to Professor Kolodko’s best-selling book - which is available in the Arabic language - under the title “Truth, Errors and Lies. Politics and Economics in a Volatile World”. The book has been nominated recently to the Michael Harrington Book Award of the American Political Science Association for an outstanding book, demonstrating how scholarship can contribute to the struggle for a better world. Professor Kolodko is a man of science, and a successful policymaker. He has been elected four times Deputy Prime Minister and Minister of Finance in Poland. He is also a Globetrotter and explored more than a 150 countries.

Professor Kolodko invites everybody to join his debate by going to his blog www.volatileworld.net and joining his Facebook page www.facebook.com/kolodko.